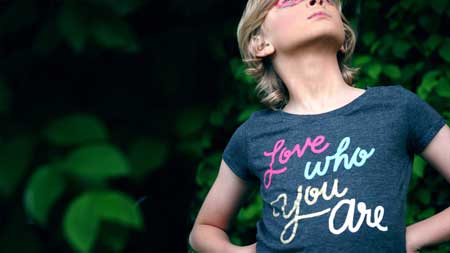 No items found.
Sign in or create an  account.
This article has members-only content!
KBH Memberships have changed! This content, along with all our premium values-based sex education material, is included in our pay-what-you-want membership plans!
Update your account
A story about the imperfections that have shaped one father's gender experience

Author's note: The following story is taken from the life of one individual in the beautiful spectrum of life. It should not be interpreted as a prescriptive model for anyone (including the author), no matter how similar the circumstances may seem. Your journey, your current spot on the spectrum of life, deserves to be uniquely honored and cherished. Thank you for reading!

Coming out at age 39 was a devastating moment for me. For over three decades I had tried to repress feelings that had no name, only shame.

When it all began...

The feelings started in my early adolescence. Seemingly overnight, I found myself stranded in a world and body that were changing faster than I could handle emotionally. I had strutted out of sixth grade crowned the “Hope of America” (the Muggle equivalent to Head Boy), only to stumble into seventh grade feeling like Quasimodo.

Compounding my discomfort was the fact that I didn’t fit the norm that prepubescent minds had determined was attractive for my age. I was overweight, dressed in extra large t-shirts and shorts, and was really nice guy: an undeniable trifecta for preteen turbulence.

Lying in bed at night that first semester,  weighed down in my skin and unable to sleep at night, I grew increasingly adept at the art of self-hate. I hated my jiggly belly and rosy chubby cheeks (both sets). I hated mean eighth graders looking for an easy target in the hallways. I hated feeling things, uncomfortable things I’d never had to deal with before: attraction and rejection.

I wished I could run away and hide permanently. I prayed to be anyone but the chubby buddy no girl wanted to “love.”

Then one night my prayer was miraculously answered, whether from God the Father or Mother Nature, I still can’t say.

In less than an instant, the hormone cocktail brewing in my developing body was stirred and shaken. For the first time, I envisioned myself as an entirely new self, freed from the suffocating self-hate now threatening my existence.

This new self was gorgeous. “She” was everything I was not at the time and, as the thought of being “her” coursed through me, my mind and body were set ablaze. It was my sexual awakening into the world and, oddly enough, I had woken up on the opposite side of the gender spectrum.

Transforming instantly from an ugly duckling into a radiant swan can have powerful repercussions on the mind of an 11-year-old boy — almost as powerful as having to watch my newly formed swan feathers molt away only moments later, leaving nothing but the ugly duckling lying under the hum of an electric blanket on a cold, dark night.

So, where does an uncomfortable, gender-confused 11-year-old go in 1990 after such a transformational experience?

Naturally, I went to the closet...

...not the figurative kind but my mother’s. Waiting for an afternoon when everyone was out, I sneaked into her room and fished out a dress I had never seen her wear (with good reason). Like illegal contraband, I smuggled it upstairs to my bedroom, stuffing it in the back of my closet behind my plethora of XL Portland Trailblazer t-shirts.

Over the following days and weeks, I would add to my ensemble of rejects: an old forgotten pair of stockings, a worn-out lipstick, a couple of blush compacts older and crustier than the surface of the moon.

Then when no one was paying attention, I’d sneak up to my room, lock the door, and experiment with them all. Unsurprisingly, the hodgepodge of apparel and makeup went together horribly. If I had been a blind drag queen with essential tremor, I doubt I could have done any worse.

Experimenting with the dregs of my mother’s feminine expression left me wanting and discouraged. I had not only failed to uncover my beautiful feminine self, but I had also traded the ideal for a Frankensteined version that had to be kept in the shadows for fear of scaring away the villagers.

Thus ended my early age of unfulfilling gender exploration. The ugly blue-striped dress eventually was placed back into the far recesses of my mother’s closet (where it rightfully belonged); the holey stockings thrown out along with the dried-out lipstick and crusty blush compacts.

I had failed to meet my most beautiful self, so I decided to break up with her and, instead, drowned my sorrows in gummies of all shapes and sizes, purchased in unhealthy bulk quantities at my local Food4Less.

Sadness still ripples up through me as I think of the pain and discomfort I experienced at this time of my life, especially given that I have boys that are the same age today. I deserved to feel better about myself. We all deserve to know how special and unique we are, especially at times when the world is shifting under our feet.

I strapped myself into a roller coaster of repression. Anytime the feelings began to climb inside me, I would throw on the brakes and drive them down, hoping I’d never experience them again.

And then, one unexpected day when the feelings spiked inside of me, I decided to stop and ask why. Within minutes, the feelings were given a name of gender dysphoria for the first time in my life. Within an hour, I feared my entire world would collapse for the first time in my life. I had spent decades following gender rules and norms that defined myself, my relationships, even my faith.

The next morning, while feeling emotionally tenderized to the point of raw desperation, I knelt and pleaded with my Heavenly Parents to reconcile my gender issues.

“How can I possibly be everything I am (a husband, a father, a son, a bishop, etc.) and also be this?”

I wanted an explanation, an answer to help bridge what seemed to me an impassable contradictory divide. My greatest fear in that moment was that there simply was no answer.

Instead, I received an unmistakable and unforgettable response:

In that moment of divine exchange, I felt that truth of those three words in the core of my eternal being. I felt instantly it didn’t matter what I wore or whether I did or didn’t paint my nails. It didn’t matter what pronoun I used or what label I chose to define myself.

It didn’t matter, not because the pain of the moment or fear of the future didn’t matter. They absolutely did.

It didn’t matter because, to my Heavenly Parents and my truest, most divine self, I was already enough as I was. I was more than enough.

Everything else... the clothes, the labels, the norms and constructs... they were all fleeting aspects of a very dynamic and divine mortal journey.

What Queer Jesus Would Do

Jesus taught that true love “rejoices not in iniquity but in the truth.” The truth is that Jesus Christ was perfectly comfortable in his queerness. He exercised perfectly his divine power to live each day without the shame of being different. In doing so, he embodied one of his most holy titles: Yahweh (translated as  “I am”).

In a world that continually seeks to draw lines between us, I believe we also hold divine powers:

Instead of fighting against the idea of a word like “queer,” what if we embraced it more universally? What if we wrapped our arms and minds around it the same way we embrace our father, our mother, our siblings and closest friends?

What would life look like if we were willing to stand and say “I am” no matter how scary and vulnerable it may seem? What could we be if we lived in sincere acceptance of ourselves and those around us every minute of the day? While time has proven it’s not possible to simply flip a switch, there has to be someplace to start.

For me, it starts by letting go of the shame of things I’ve held onto for far too long; things that I’ve always considered ugly burdens when, in reality, they’ve been the driving force in the development of who “I am.”

I am the happiest and luckiest man alive, married to the woman of my dreams. I am the father of four boys that inspire me daily. I am the fortunate son of multiple loving parents, both in this life and the heavens. I am a brother, an uncle, and a friend surrounded by loved ones that inspire me to be better.

I am also perfectly flawed, with one of my heaviest imperfections to date being that I have lived a life of struggle when it comes to gender — feeling both masculine and feminine at times.

To the world and to strangers, that makes me transgender. However, to myself, to “I am,” and to those I love, I have learned it makes me more. I have learned I am not more in spite of my beautiful imperfections (all of them). I am more because of them.

I sat on this truth, hiding it from my view for too many years. Once I started examining it openly, I discovered that we (especially those of a conservative religious background), carry around our beautiful imperfections as if they were giant boulders, burdens on our path of progression.

I’ve learned through my wrestles with gender that they are not. Our imperfections are instead the wings that allow us to fly closer to heaven than we ever knew possible. Take away the imperfections, the deep struggles of the soul, and you take away the true meaning of life.

It would be nice if simple recognition completely removed the burden but we still have to decide how to coexist with our “imperfections.” For me, that means wrapping my arms around both sides of me every day, saying “I love you,” and then focusing on what matters most: living up to sacred promises I’ve made to God, my wife, and my children. It means being the best husband and father I can be today, without too much worry about what I may or may not be in the future.

I’ve learned that we, like Jesus, all have elements of ourselves that do not correspond to established ideas. These elements make us real; they make us beautifully queer in the eyes of a loving God.

Please recognize that you too are beautiful.

Your imperfections are a beautiful mix of human and divinity. They deserve not only to be accepted but celebrated in the holiest and most reverent manner.

Get 15% off when you sign up for emails from Kristin

Subscribers get tips and insights from Kristin in our free newsletter.
You'll also get a discount code to save 15% on your first order!

The Wonderful World Of Lube